Bitcoin 101: An introduction to blockchain technology

Everyone has heard about Bitcoin. What started as a fringe piece of niche technology has become a household name, and anyone today should have heard the words “Bitcoin”, “blockchain” or “cryptocurrency.”

Bitcoin is over a decade old now, and its history has been a thrill ride that can surely be considered a major success story. From nothing but an idea shared by a small group of enthusiasts on Internet forums, to a global phenomenon capitalized at about 200 billion dollars - for anyone who's seriously interested in keeping up to date with financial technology it's now impossible to ignore Bitcoin and blockchain.

The history of Bitcoin

But what exactly is Bitcoin? Bitcoin (BTC) is a cryptocurrency created by a person or a group of persons working under the pseudonym Satoshi Nakamoto. On October 31st 2008, Satoshi published a paper titled Bitcoin: A Peer-to-Peer Electronic Cash System on a mailing list for cryptography enthusiasts calling themselves “cypherpunks”. Very soon after that, on January 9th 2009, the source code for the initial version of Bitcoin software was released, which marks the official birthday of the Bitcoin network.

Although computer scientists were entertaining the idea of creating an electronic currency using advanced cryptographic technologies for over a decade before, Bitcoin was the first cryptocurrency to actually be developed as a working product.

Bitcoin’s precursors such as Hashcash, DigiCash, b-money and Bit Gold also aimed to create a digital, cryptographic currency, Bitcoin was the first to succeed because of the invention of blockchain - a decentralized ledger.

Bitcoin and blockchain cannot be understood without stressing the concept of decentralization. It’s essential to note that the cypherpunks who were the early developers of the concept of cryptocurrency were largely inspired by Austrian economics and libertarian philosophy. From the very start, Bitcoin was aiming at something much bigger than just being another online payment solution - its creators and early adopters were trying to revolutionize the very concept of money itself.

Before moving on to discussing what exactly is blockchain and how cryptocurrency differs from fiat currency, one of the most mysterious events from the history of Bitcoin must be mentioned: the disappearance of Satoshi Nakamoto. Satoshi has been working on the Bitcoin source code and partaking in discussions on the bitcointalk.org forum until mid-2010. At that time, Nakamoto stopped all his activities, and relegated the control of all the Bitcoin-related domains he registered.

Nobody has heard from Satoshi ever since, and what’s most important - the BTC 1,000,000 he owned remain untouched. This massive amount of Bitcoin, known commonly as Satoshi’s coins, was worth almost $20 billion at Bitcoin’s all-time high in December 2017, which would make Satoshi Nakamoto one of the top 50 richest people in the world. Although many people have tried to deduce the real identity of Satoshi and the reasons for his disappearance, nobody has been able to conclusively prove who really was Satoshi Nakamoto.

So what is the difference between Bitcoin and "traditional" money? Fiat currency (the money issued by the government, like the US dollar) has one major flaw: it is being issued by centralized governments. As a result, the value of a currency can be manipulated and over time ineffective monetary policies can lead to dramatic changes in valuation of the currency.

People who keep their life's savings in fiat currency - for example on a saving account at their bank - can lose their entire wealth almost overnight. Hyperinflation - an extremely fast devaluation of currency - is not just a theory, but something that happened many times in history. Notable examples include Russia after the fall of Soviet Union and Germany before World War II. In the more recent times, Zimbabwe and Venezuela are the the most famous instances of countries falling victim to hyperinflation. 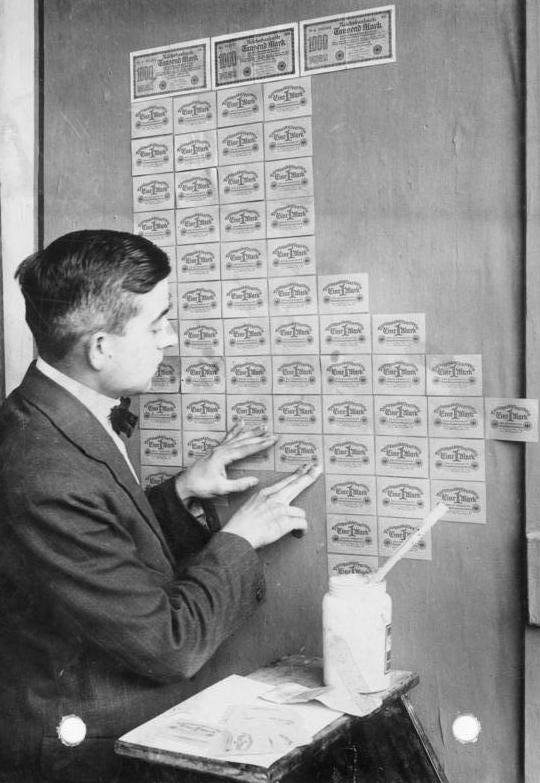 Even if a fast devaluation doesn’t occur, all fiat money is subjected to inflation - a slow but constant devaluation of currency relative to the increase of average prices level in an economy. It’s something that is in the very nature of fiat money, and since the money supply relies on centralized issuers - central banks and governments - people who decide to store their wealth in fiat money have no other choice but to accept the fact that their money constantly loses value.

What Bitcoin aims to achieve is solving both of the major problems of fiat money: centralization and inflation. Bitcoin is a decentralized and deflationary currency. It's immune to inflation because there is a hard limit of 21,000,000 Bitcoins that can exist - nobody can ever create even a single Bitcoin over that limit.

To understand how Bitcoin's decentralization works, we have to take a closer look at what the blockchain technology exactly is.

A blockchain is basically a decentralized ledger - a network acting as the registry for all the transactions passed on the network, updated in real time, and stored in its entirety on tens of thousands of computers around the world. Anyone can be part of the Bitcoin network, as it requires nothing more than a computer connected to the Internet that runs the Bitcoin software and has enough disk space to store the entire blockchain.

The decentralized ledger underlying Bitcoin is called a blockchain, because it is not continuous but split into blocks. Each block may be compared to a single page in a record book, and together the blocks form an unending chain, so that the entire thing resembles a giant book chronicling the history of every single Bitcoin.

Transactions on the Bitcoin blockchain are verified by active nodes on the network. To create an economic incentive for the decentralization of the network, verifying transactions is rewarded. Each block is linked to a mathematical problem requiring immense processing power to solve. Bitcoin miners are individual people and companies that use powerful hardware setups to constantly process and record transactions on the Bitcoin ledger, trying to be the first to solve the problem and complete the current block. Whoever does that is rewarded with a fixed amount of BTC.

The blockchain is constantly growing, as every new transaction made on the Bitcoin network is recorded on it. From the very first one, made on January 12 2009 by Satoshi Nakamoto, to hundreds of thousands of transactions that are currently being made daily, every single Bitcoin sent or received is recorded and stored in tens of thousands of identical copies kept on every continent and in almost every country in the world.

If you've been paying attention, you must have noticed how the Bitcoin network has no equivalent of governments, financial institutions or anything resembling banks, especially central banks. Every computer on the Bitcoin network is equal, nobody has any special privileges or authority. Nobody can print more Bitcoin, and there never will be more than 21,000,000 Bitcoins. This is why Bitcoin is deflationary - it is a truly scarce commodity, and with growing demand its long term value is likely to go up.

Beyond Bitcoin: the blockchain ecosystem

The idea of a deflationary, decentralized digital currency has been a tremendous success: from being worth a couple cents at its inception, to $1 after less than a year, to $100 dollars in 2013. In the same year the price of Bitcoin reached $1,000, and it has been growing ever since, albeit with periods of corrections and bear markets. At the time of writing of this article, the price of Bitcoin is worth slightly over 50% of its all time high of almost $20,000 in December 2017. 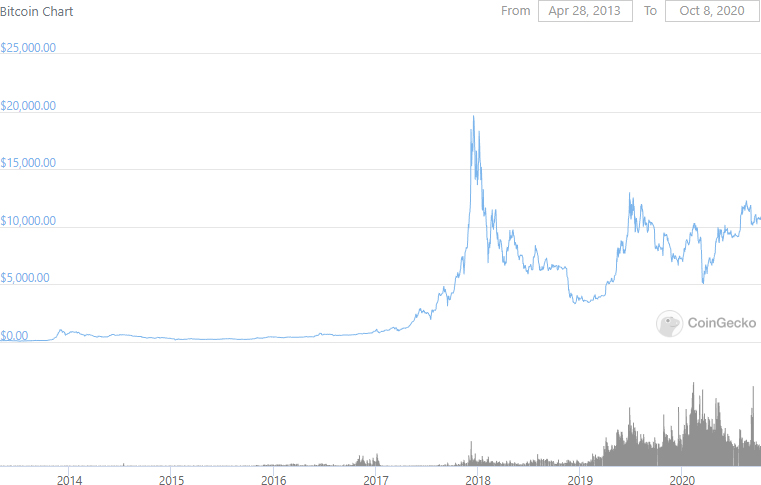 The tremendous economic success of Bitcoin caused an entirely new branch of the tech industry to bloom. Thousands of new blockchain projects and cryptocurrency companies were created, forming what has become commonly known as the blockchain ecosystem.

Some of the projects tried to create a cryptocurrency that would be better than Bitcoin (for example, by providing faster transactions or lower fees), and others decided to take a closer look at blockchain itself - the underlying technology Bitcoin.

Although blockchain was invented specifically with the purpose of powering up Bitcoin - a digital currency - many people have noticed that blockchain technology has more possible use cases.

Tech startups have been experimenting with innovative applications of blockchain technology - from digitalizing financial securities to tracking shipping containers or storing health data - attracted by the possibility of storing any kind of data in a secure and decentralized way.

Most of the existing blockchains are public ledgers, exactly like Bitcoin - the blockchain can be accessed and independently audited by anyone. Public ledgers, also called permissionless blockchains, can be accessed and used by a large number of people from around the world, with no special requirements. Some companies decided to develop private blockchains, designed to be used by a limited and controlled number of people, such as employers of a single company. A private blockchain like that is not really a decentralized, distributed ledger, and resembles a closed, secure database utilizing advanced cryptographic techniques typical to blockchains.

Private blockchains shouldn’t be confused with privacy coins. Privacy coins are cryptocurrencies designed to provide a privacy level far surpassing Bitcoin. Bitcoin wasn’t really designed with privacy in mind - records of all transactions are fully public, and everyone can easily check how many Bitcoins are stored on any Bitcoin address in the network, and the sender, recipient and amount of every transaction can be easily established. Privacy coins such as Monero (XMR) or Zcash (ZEC) use advanced algorithms and cryptographic techniques to obfuscate transactions on the network, so that even though the blockchain remains public, it's extremely hard for a third party to stick a nose into someone else's wallet.

Conclusion: Bitcoin to the moon?

The story of Bitcoin's success lies in the fact that it has so far delivered what it has promised - a sovereign, decentralized, deflationary store of value independent of banks and governments. Of course Bitcoin has its flaws, the most obvious ones being transaction costs and processing time depending on the state of the network. However it's good to remember that Bitcoin has survived and overcome every single obstacle in its way so far.

Even though over 5,000 different cryptocurrencies are estimated to exist today, with many projects exploring the possibilities of blockchain technology by applying it to innovative use cases, when it comes to the original use of blockchain - a decentralized, digital store of value - no other crypto has come close to surpassing Bitcoin. BTC is still by far the biggest and most popular blockchain, and none of the altcoins (cryptocurrencies alternative to BTC) promising to be "the next Bitcoin" has delivered. In fact, Bitcoin’s market capitalization is currently over three times larger than the combined capitalization of the 9 other cryptocurrencies from the list of the top 10 coins with highest value.

Although nobody can predict the future price of Bitcoin for sure, it is likely to continue growing as all signs point to the fact that we are still very early in the process of Bitcoin adoption. Major financial institutions have only recently started to take Bitcoin seriously as an asset class, and while in some countries Bitcoin is growing immensely popular, in others it is still perceived as a fringe sector of technology and finance.

The one thing we can be sure of is that Bitcoin is here to stay, and that the blockchain revolution that begun in 2009 may only be the beginning of something much bigger.